Toni Morrison passed away last week. With the Administration’s hateful rhetoric, and three mass shootings in the span of a week and a half,  I found hope in re-visiting her 1993 Nobel Prize speech.

She begins her speech with a story about a wise, blind woman, who is asked by a group of children if a bird that they are holding in their hands is dead or alive. Dead or alive —  the blind woman thinks this is a trick, a cruelty, the fate of this poor creature in the hands of the children. As a part of this story, Morrison uses the bird to illustrate her fear of how language can enable oppression and violence, which feels so timely in our political climate: “The systematic looting of language can be recognized by the tendency of its users to forgo its nuanced, complex, mid-wifery properties for menace and subjugation. Oppressive language does more than represent violence; it is violence; does more than represent the limits of knowledge; it limits knowledge. Whether it is obscuring state language or the faux-language of mindless media; whether it is the proud but calcified language of the academy or the commodity driven language of science; whether it is the malign language of law-without-ethics, or language designed for the estrangement of minorities, hiding its racist plunder in its literary cheek – it must be rejected, altered and exposed.”

But alas! The children are ultimately not cruel. They wish to tap into the women’s wisdom and experience to understand life — all of it — and death. I love that Morrison uses the vulnerability of language to build up our own sense of vulnerability for the bird and the power of the children. I can viscerally feel the cruelty, or the anticipation of it, from the children. I imagine the myriad times when I, as I get older, with all my rhyme or reason, look into the eyes of children and feel sheer terror for not knowing what’s behind them.

And then Morrison quickly reverses our expectations of how the story should go.

Reading this was a reminder of how vulnerability and fear can make it easy to build up walls and false narratives, and I need to fight the desire to judge and close down. Especially during times like this, and even when the world can be so, so ugly. And it was a reminder to have faith that we will have a path toward shared prosperity if we approach these difficult moments without judgement and with openness.

“Finally”, she says, “I trust you now. I trust you with the bird that is not in your hands because you have truly caught it. Look. How lovely it is, this thing we have done – together.”

What are the words you do not yet have? What are the tyrannies you swallow day by day and attempt to make your own, until you will sicken and die of them, still in silence? – Audre Lorde, The Transformation

What I read this weekend: I’ve experienced the power of great storytelling in all of its forms: from exceptional journalism that broke my heart and opened my eyes wide, poetry that spoke intimately to my consciousness, to the chic Glossier ad that sold me the promise of feeling chic, effortless, and free when you sport skin as smooth as a baby’s ass.

I wish I could tell good stories. I suck at telling good stories. I never seem to get the pacing right, I don’t give enough context, my punchline is only funny or compelling to me, and I focus in on all the wrong details.

I suck in part because I’m not practiced. I’ve mostly stayed silent. Perhaps to appear normal, or because of fear and trauma. Or maybe because I didn’t see a space for my stories.  Last weekend, I sat on a panel with a Vietnamese woman that grew up in my neighborhood. In hearing her frank and unsentimental account of her life, I realized that I had never shared my own. With friends, even! I realized that I’m not afraid of vulnerability; I’ve kept silent in fear of being cast as “other”.  And for so long, I’ve adopted versions of stories, allowing other people’s narratives set the bar of what is OK to share.

It feels comfortable to say storytelling isn’t my jam, shrug it away, and move on with my life. But I need to learn. My story is so important, and so is yours. We further our collective consciousness in deep and meaningful ways when we tell our stories.

So how do you begin? For me, it starts with getting my stream of consciousness into clear, concise, and digestible writing. I also want to use a variety of tools, including data and strong imagery. Think Matthew Desmond.  Here are the resources I’ve started with:

I enjoyed this wide ranging conversation between Marc Andreessen, Ben Horowitz, and Tyler Cowen, which covers their partnership, how Marc and Ben thought about a16z’s differentiation when they founded the firm, how VC has evolved, and what’s next for [insert your favorite tech or industry here]. There are several gems in this episode (which somebody painstakingly captured on Breaker) and worth a full listen. Here’s one that I found particularly useful…

From Marc, in response to Tyler’s question, “Did you invent the tweet storm?”:

“I literally couldn’t shut up, so it sort of catalyzed. The big lesson for these internet platforms is […] emergent behaviors is incredibly important. The really successful platforms let users surface the behaviors that the creators of the platform could have never thought of. Twitter has had issues over the years, but […] the compelling ways people have used Twitter have been invented by users. […] It’s not just Twitter. It was true of the personal computer. It was true of smart phones. It’s been true for many of these Internet platforms. It’s a useful principle for product design: let the users innovate.”

Emergent behavior extends far beyond product, and is a useful principle across a number of domains. For me, top of mind are community building, advocacy and organizing, but I do wonder how one tracks and responds to these interactions in an offline environment. You’re operating in an environment wherein the data isn’t (1) readily available, and (2) as responsive, so how do you know when that behavior is indicative of a larger group behavior? What is real and what is noise? If you want to co-create with your community, how do you set up a response system for that kind of interaction?

In any case, as a person that’s constantly holding everything in her head, planning everything from A to Z, I appreciate the reminder to let go, enjoy the magic of improvisation, and make it up as I go along (with co-conspirators, if possible).

(P.S. I just realized that my blogs ask a lot of questions but rarely suggests a hypothesis or attempts to find the answer. I’m going to try to do that more in 2019.)

What I read this weekend: I feel such heaviness from the vicious cycle of bad news and bad forecasts, from immigration policy, deteriorating social safety net and world order to climate change and automation. It feels like we’re only going backward. And some days, this weight compounds because these problems feel insurmountable. This Shouts & Murmurs piece does a great job of capturing the manic hum of doom and gloom.I found this hopeful article that makes a case for progress, and in turn, optimism. The author cites Steven Pinker’s Enlightenment Now book and a few other notable thinkers on this topic, and an observation that really stuck with me is that this pessimism could ultimately affect the policies we choose to support and how we vote. I also listened to an interview with Vitalik Buterin (the founder of Ethereum), who believes that the most popular delusion or irrationality should be our belief in progress. I’m now thinking of ways to actively flip these negative scripts in my head, and to find scripts for hope, optimism, and progress even in trying times. I shared this reflection with my team and some friends, who shared their own awesome life hacks:

(Thanks Eliza, Larry, Ryan, and Markeze.)

So: what does give me hope? People that show up, as much as they can, like these wonderful humans that came together for the Families Together demonstration. We walked from Dolores Park to Civic Center to protest immigration policy in solidarity with our neighbors. 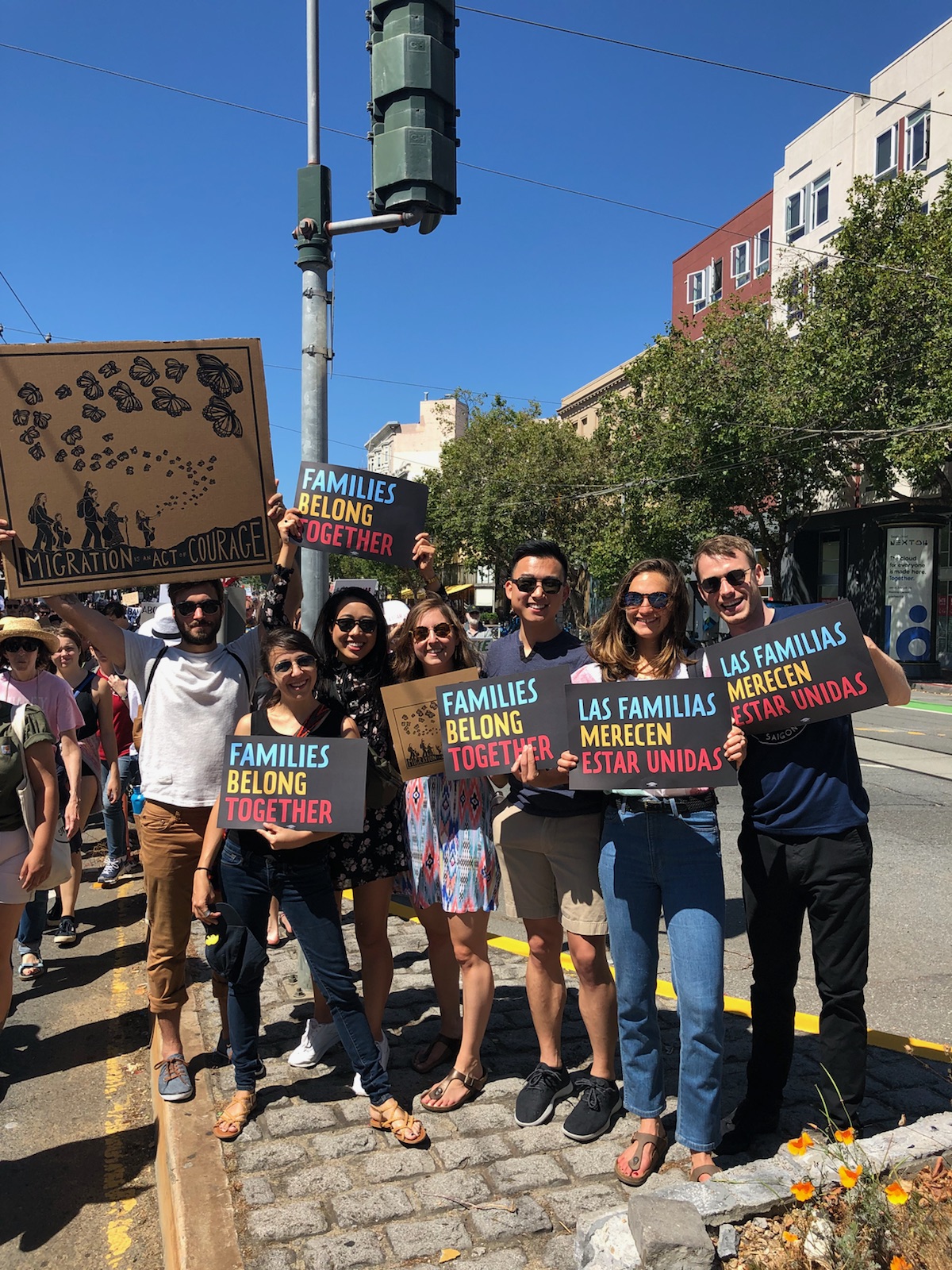 I’ve never met a vegetable that I didn’t like, and I credit this to the magic of Vietnamese cuisine and my mother’s cooking.

She grew up in the cooking traditions of Huế, the former imperial capital of Vietnam. To accommodate royalty, its people had a fierce devotion to perfectionism, and you can see this conscious attention to quality in every part of its culture. When I think of food from Central Vietnam, I think of dishes that are focused on nuance and the details, with a particular gift for illuminating the flavor profile of vegetables. Take my mom’s bún bò Huế (Huế-style beef noodle soup) for example: you blanche a mixture of raw bean sprouts, mint, basil, banana flower in a steaming bowl of 12-hour lemongrass and beef broth. Vegetables were/are dank.

I remember reading books and watching Disney channel shows about American families, and was struck by how much other kids seemed to hate vegetables. Vegetables were a dramatic point of contention between kids and their parents. I remember lying to my friends about hating broccoli to fit in.

All this to say, my relationship with what is good and healthy for my mind, body, and soul started off easy. And this became my experience with self-care: mostly easy. There was nothing a good run, a face mask, or treating myself couldn’t fix.

But sometimes, the things that are good for you can be difficult and unpleasant

I joined venture capital a few years ago, and I wish I could say it’s been smooth sailing. I feel like I’m continually battling the decision fatigue and emotional roller coaster of (1) making (many) sound decisions and (2) being thoughtful about how to best support and empower entrepreneurs. And day after day of this stress and anxiety, I found it harder to recover. Things that used to get me back to baseline–like say, the sheer physical exhaustion from a run that gives you that incredible runner’s high–no longer worked. Nursing running injuries, I feared what would happen if I could no longer run.